In most countries, there is a requirement to have flight data from the Flight Data Recorder (FDR) system regularly downloaded and validated. This requirement is in addition to any physical maintenance checks that may be required for the FDR. The check consists of interpreting the flight data using specialized computer software to ensure that mandatory flight parameters such as airspeed and altitude are being recorded correctly and at the minimum frequency or sample rate.

Unlike an FDR maintenance or serviceability check, the FDR System check is intended to assess the functionality of all components of the FDR system; not just the FDR itself.

Flight data has its beginning at sensors located on various parts of the aircraft. This data may then move to an Air Data Computer, or to a data bus before proceeding to the aircraft’s Flight Data Acquisition Unit (FDAU). The FDAU serves as a type of funnel that takes all of this collected information, puts it in a standard format (normally ARINC 717) and writes it to the FDR. The FDR itself is really just a recording device that captures whatever data is sent to it by the FDAU. 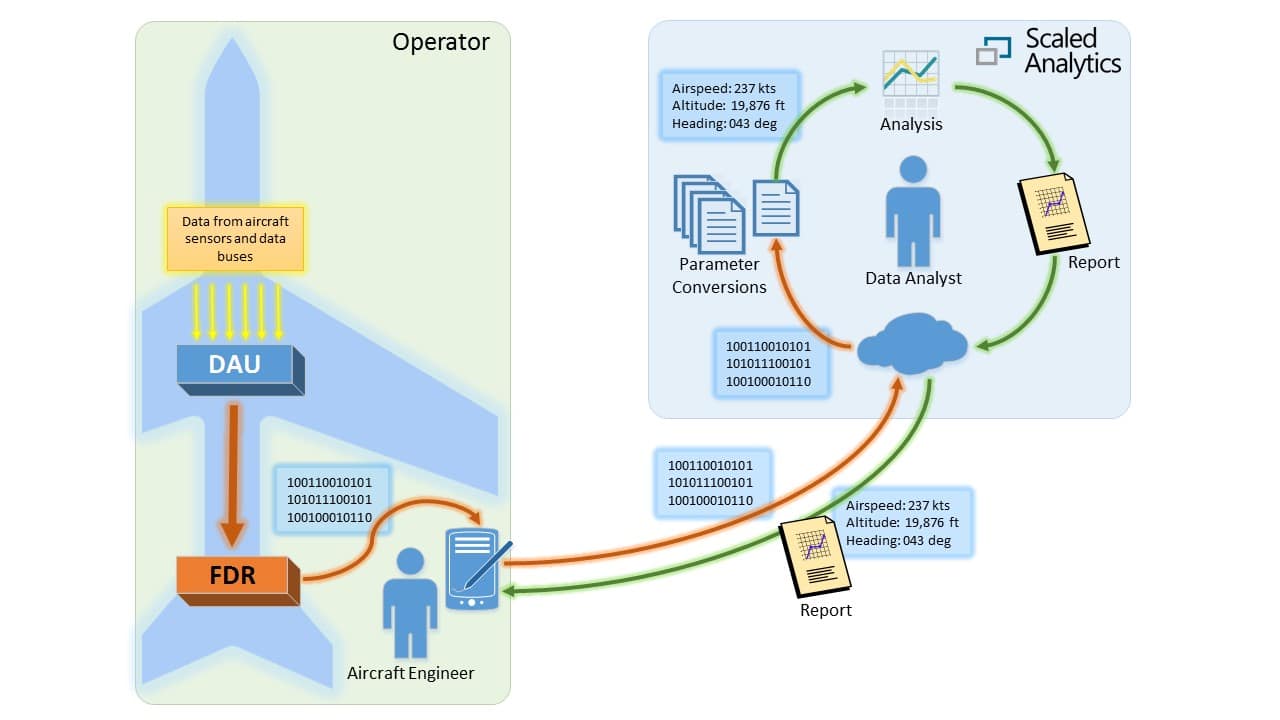 It is also worth noting that, although it is less common today, some older aircraft do not have a FDAU and data from the sensors is sent directly to the FDR. The process for evaluating the system, however, is the same and we at Scaled Analytics have extensive experience working with these kinds of systems.

Once the raw, binary data is recovered from the FDR, a Parameter Conversion file is used to convert the “ones and zeros” back into meaningful engineering units such as altitude and airspeed. These special files are commonly referred to as LFL (Logical Frame Layout) or FRED (Flight Recorder Electronic Documentation) files. The Parameter Conversion files are not a “one size fits all” and there are many versions of these files, even for one particular aircraft type (the B737 family alone can have 50 or more). In the event of an accident or incident, it is the aircraft operator’s responsibility to provide this information to the investigating board, so it is crucial that the operator knows what parameter conversion information is to be used with each aircraft and that it is functioning properly.

At Scaled Analytics, we have more than 90 years of combined experience looking at flight data and we have seen these issues first hand. We also have one of the world’s largest libraries of Parameter Conversion files, so chances are we already have a file for your aircraft. But even if we don’t, we are experts at creating these files so we can still ensure a quick turnaround for your FDR System Readout as soon as we receive documentation for your aircraft.

About
Leadership Team
Partners and Affiliations
Why Scaled Analytics?